Rike Frank and Tirdad Zolghadr revisit their recent project SLOHAGENHALLAH, which unfolded in Palestine on May 5, 2016 in collaboration with the art academies of Oslo, Copenhagen and Ramallah. The project was an exploration of the student show as a format and genre which is very much undertheorized and underhistoricized, and thus completely underestimated in the field of contemporary art, and even in art pegagogy itself. 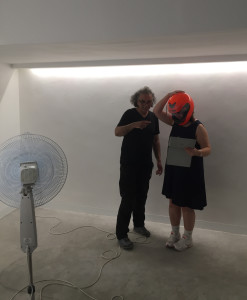 A student show is often the very first exhibition experience, a rite of passage from student to artist. Anyone who has followed the making of a student exhibition from up close will know that more rigorous discussion, more heartfelt research, and more dogged negotiation is oftentimes invested here than in many a professional endeavor. Frank and Zolghadr will broach the particularities of the format, its potentials, dialectics, and attendant Institutional power relations, by means of a mutual Q&A. Each will present the other with three to four questions, all of them as unfair and belligerent – and entertaining – as possible. Participating SLOHAGENHALLAH students, meanwhile, will be invited to contribute by means that are performative, discursive or visual in nature.

Tirdad Zolghadr is a curator and writer. Curatorial work includes a number of discreet durational projects and several biennial settings. In terms of recent writing, the working title of Zolghadr’s third novel is “Headbanger”, while “Traction”, an art-theoretical polemic, will be published by Sternberg Press Summer 2016. In a teaching capacity, Zolghadr is affiliated with the Dutch Art Institute in Arnhem, among other institutions, and a frequent lecturer at the International Academy of Art Palestine.

This talk is part of the lecture series On Location – Conversations with the Faculty.