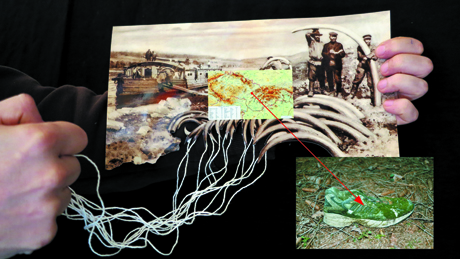 «The Nervous System» is a performative lecture that follows the previous collaboration of the two artists Jiří Kovanda and Zbyněk Baladrán in a variety of formats. After the show, which was held in Milano Kunstverein in 2011, they published a book based on the combination and mixing of images and conversation. The theme of each output is exploring the possibilities of human creativity and work under the current conditions of the transforming global capitalism, continuing the experimental practice thinking about the art methodologies and what they are.

Jiří Kovanda ranks among the most renowned contemporary Czech artists. His work has been represented in prestigious international art exhibitions, such as the Tate Modern in London (the performance “Kissing through Glass”) and at Documenta 12. He gained international recognition through his performances and interventions from the 1970’s and 1980’s, which became crucial to the essential exhibitions mapping and incorporating art of the former Eastern Block back into European and international contexts, namely East Art Map, Body and the East and Parallel Actions. Kovanda’s early performances and installations were initially perceived internationally as political art (as everything that deviated from the so-called “normal” during the normalization period in Czechoslovakia). More recently this view has altered and moved closer to the individual area of social experience and a minimalist gesture.

Zbyněk Baladrán (b. 1973, Prague, Czechoslovakia) is an author, visual artist and curator. He studied art history at the Charles University’s Philosophical Faculty in Prague from 1992-1996, and from 1997-2003 at the Prague Academy of Fine Arts in the Studio of Visual Communication. He is one of the co-founders and a curator of Galerie Display, which was established in Prague in 2001, and in 2007 merged with tranzit.cz into Tranzitdisplay, where he continued to oversee the exhibition program. He is also the co-curator, with Vít Havranek, of the project and exhibition «Monument to Transformation», a 3-year research project on social transformation, that was presented at the Prague City Gallery in 2009. Baladrán was also a part of the team of curators (tranzit.org) for Manifesta 8, Murcia, Spain in 2010. His artworks can be characterized as the search for links between the past and its construction in relation to the prevailing epistemological patterns. His works are represented in various international private and public collections.