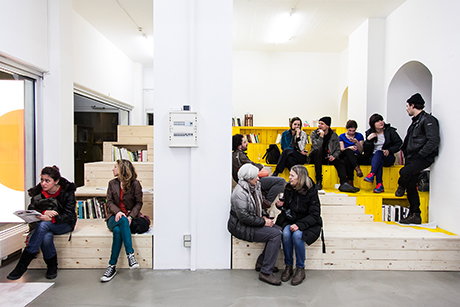 Céline Condorelli’s practice is concerned with how our encounter with the material world happens through counting on it, and the fact that all human action takes place amidst countless structures of support mostly taken for granted, and therefore appearing almost invisible.

«I have been investigating forms of display by problematizing the notion of ‘support’–the physical, economical, social, political structures and infrastructures that correspond to conditions of possibility. I am interested in working with the manifestations of blindness towards them, and do so by re-imagining them through a variety of possible relations between context, exhibition, work and the public; which has in turn allowed the questioning of these categories and the notions they form. This particular attention has developed through installations, exhibitions and publications that foreground display by proposing it as my main artistic medium in both form and subject, through the construction of structures of display, staging devices and framing mechanisms, the apparatuses of visibility that I have come to designate as ‘support structures’.»

Céline Condorelli (CH, IT, UK) is a London-based artist; she is the author and editor of «Support Structures» published by Sternberg Press (2009), and one of the founding directors of Eastside Projects, an exhibition space in Birmingham, UK. She is currently Professor at NABA (Nuova Accademia di Belle Arti), Milan. Recent exhibitions include «Céline Condorelli», Chisenhale Gallery; «Things That Go Without Saying», Grazer Kunstverein, Austria; Oslo Kunstforening (2011-12) and Manifesta 8.