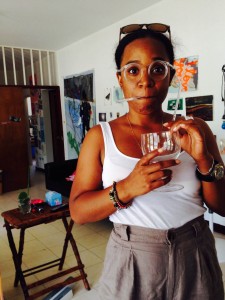 In a recent essay, provocatively titled The Non-Existence of Norway, Slavoj Zizek wrote of the latest migrant crisis: “The greatest hypocrites are those who call for open borders. They know very well this will never happen: it would instantly trigger a populist revolt in Europe. They play the beautiful soul, superior to the corrupted world while continuing to get along in it. The anti-immigrant populist also knows very well that, left to themselves, people in Africa and the Middle East will not succeed in solving their own problems and changing their societies. Why not? Because we in Western Europe are preventing them from doing so.”

In my talk, I would like to explore the alternatives to Zizek’s bleak picture and charge artists (and the broader creative community) with the responsibility to uncover, model, and interrogate these alternatives. I will lead an informal discussion on immigration and travel, using my own experiences (as a Jamaican national, which means I require a visa to enter all but 8 of the world’s nations), the work of Martinican philosopher Édouard Glissant (particularly his Poetics of Relation), and the work of Cuban-American artist Tanya Bruguera as a lens for thinking through the ways people traverse borders in this globalized age. Must we submit to Zizek’s failure of imagination? Or are there other ways of thinking through the matrix of space, difference and history that discussions of migration engage? Come ready to contribute to the discussion…

Nicole Smythe-Johnson is a writer and independent curator, living in Kingston Jamaica and working across the Caribbean. She has worked with a number of institutions, including: the National Gallery of Jamaica, the Perez Art Museum of Miami, and artist-run New Local Space in Kingston. She is currently a curatorial resident at the Henie Onstad Kunstsenter as part of the A Pendaflex for the Future programme.