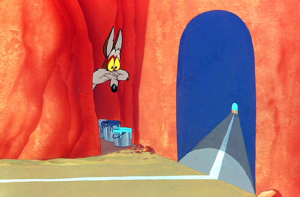 The first stable photograph exists but isn’t visible. Originally commissioned by Witte de With in Rotterdam and recently re-presented as a talk ‘on voice’ at Artists Space in New York, Angie Keefer’s lecture, “The View from the Window at Le Gras,” considers the reproductive ambitions of images by way of illuminated words, following a brief initial detour through a solid rock wall.

Angie Keefer is an artist, but the Internet says she is “better-,” “best-” or “predominantly” known as a writer, editor, and publisher. Her work will be on view in New York from October 10 at Greater New York, MoMA PS1. She has recently exhibited, staged, taught, published, spoken, or otherwise produced work at Kunstverein Munich (2015); Liverpool Biennial (2014); Whitney Biennial, New York (2014); Objectif Exhibitions, Antwerp (2013-14); Mercosul Biennial, Porto Alegre, Brazil (2013); Witte de With, Rotterdam (2013); Yale Union, Portland (2013); and São Paulo Biennial (2012), among others. In 2010, Keefer co-founded The Serving Library, a not-for-profit artists’ organization dedicated to publishing and archiving in a continuous loop, and is co-editor of The Serving Library’s bi-annual publication, The Bulletins. She graduated from Yale University, where she studied sculpture. She teaches listening at the Royal Institute of Art in Stockholm, and lives in rural upstate New York.