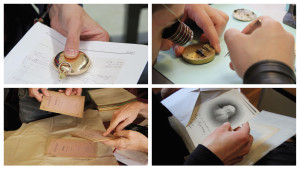 Artists, Anarchists and Watchmakers
—a research into early anarchist publishing

As a basis for our presentation we will take a number of video fragments of our ‘road trip’ along original copies and facsimiles of one of the early anarchist journal Bulletin de la Fédération jurassienne in archives and libraries in Switzerland, Berlin, Amsterdam and Milan.

What started out as an open-minded investigation into anarchism and self-organization in relation to art and publishing, we narrowed down to a micro-exploration of 19th century anarchism in the valley of watchmakers in the Swiss Jura mountains, where anarchists like Bakunin, Kropotkin and the painter Courbet found refuge. Because the subject is enormously complex we decided to focus on the ‘material history’ of one single newspaper: the famous Bulletin de la Fédération jurassienne (the first internationally oriented anarchist newspapers, published in the Swiss Jura between 1872 and 1878).

In the CIRA, an anarchism archive in Lausanne, we got to know about early anarchism’s publishing practices, how they were ‘first users’ of the new technologies of their time and set up informal international networks for the exchange of information and ideas.
To our surprise the cheaply produced pamphlets, newspapers and bulletins looked very familiar to contemporary zine-making artists like us—making it easy to relate to the collaborative DIY approach (in production as well as distribution), and the particular mix of local and international involvement.

If it’s true that utopia’s aren’t fantasies, but spring from people’s real, daily experience, what in the practice of watchmakers of those days made them refuse centralization and hierarchy? And did anarchist ideas shape their practice of publishing?

BIO
Fucking Good Art is a travelling artists’ magazine published both on paper and online, founded in 2003 by Dutch artists and non-academic free-style researchers Rob Hamelijnck and Nienke Terpsma. Embracing book-proportioned editions as well as humble pamphlets, its impulse has often been to focus on the editors’ investigation of (and with) local artistic communities, self-organization and self-empowerment and the simultaneous mobility and locality of art practice. They are interested in oral history, ethnography, documentary, investigative art, counter- and subcultures, and anarchism.