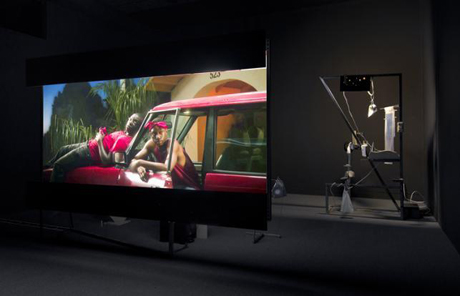 ­­­­In his practice Neïl Beloufa (b. 1985, France) demonstrates a persisting interest in dichotomies; reality and fiction, cause and effect, presence and absence, all of which he communicates through mediums ranging from sculpture, video, installation and conceptual photography. Through his construction of dichotomies Neïl Beloufa is able to deconstruct our perceived ideas of truth and fantasy, thus posing fantasy as truth.

Neïl Beloufa himself dubs some of his work as “ethnological sci-fi documentary”. His video ”Untitled” (2010) charts the story of an Algerian family whose house was forcefully occupied by terrorists. Yet, truth is questioned here through the family’s attempts to imagine how the terrorists may have acted in their home, thus replacing truth with fantasy in order to create documentary. Neïl Beloufa has had solo shows at gallery Zero, Milan; Whitebox, New York and Francois Ghebaly Gallery and the HAMMER, Los Angeles. He has also participated in group exhibitions at Manifesta 8, Murcia; Extra City, Antwerp; Netherland Media Art Institute, Amsterdam; Israeli Centre for Digital Art, Holon; The David Roberts Art Foundation, London; Palais de Tokyo, Paris; Armory Center for the Arts, Pasadena and lately the Venice Bienniale 2013 as well as the Lyon Bienniale 2013.