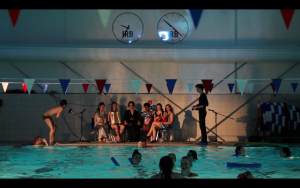 Lina Lapelytė explores contemporary forms of performativity that are related to a genre of new opera and performance in a context of contemporary art. Her works are fueled by expression, marked by pastiche and grotesque, contextual and conceptual musicality, theatrical suggestibility,  stylized visuality. Performances and operas unfold sensitivity to feminine identity and it’s complex relation to contemporary reality in a manner of tradition of postfeminist art.