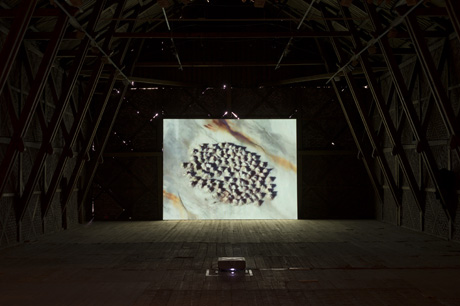 Andreas Bennin (graduated with an MA from Kunstakademiet in 2012) focuses on how our ideas and perception about reality is formed, what and who’s defining them. He has been working a lot with landscapes, in search of the parameters defining nature and culture.

For the last four years he has been working on the project “A Nation Restored”, that looks into the large scale restoration of the landscape at Dovrefjell. The mountain has a significant place in norwegian culture, both present in myths of how Norway emerged as a country and when defining what was Norwegian after the country got the constitution in 1814. The last 100 years, the area has been used by the military to both practice and to test out weapons and armory that has provided the country with a substancial income. Now all the traces of this recent history is being erased, with the aim to restore/construct nature. “A Nation Restored” looks at the motifs and consequences of this redefinition of reality. The upcoming exhibition “Domestications”, at Fotogalleriet, opening 26. September, continues the project “A Nation Restored”. It shows photos and film shot in the landscape at Dovre, with the national romantic ideas of nature that seems to define the undergoing restoration at mind. It uses photographic medias to explore how the redefinition of the landscape also implicate a redefinition of the history and reality of this site, and Norwegian ideals anno 2013.